Murder:  The Albany Argus contains the following extract of a letter from Delaware county:  "I have the unpleasant news to relate that a murder has again been committed in our county.  Mr. Foster of Masonville [Delaware Co., NY], and a girl who lived in the house with Foster, have been taken into custody on suspicion of poisoning his wife.  She survived but a short time after she took the poisonous draught."


At the Oyer and Terminer for Delaware county [NY], on the 2d inst. Nathan Foster, aged about 66 years, was convicted of the murder of Eleanor Foster, his wife, by poison, on the 29th of January last; and sentenced to be hung on Friday the 6th of August next, between the hours of 12 and 6 o'clock P.M.
Perhaps no cause ever excited more interest, and no fact more clearly proven--Not a doubt remained upon the minds of any, after the trial, of his guilt; and the event of this trial shows plainly, that an all wise God superintends the affairs of men--that he sees all their actions, and will make them manifest  The clear and perfect chain of circumstances, together with the conduct of the prisoner and his confessions, and the manner in which they were brought to light, are truly astonishing.  It was intended by his friends to have applied to the executive, for the exercise of his clemency--but the court and jury, and every person who attended the trial were so perfectly satisfied of the prisoner's guilt, that it is understood they have abandoned the idea, and of course his fate is irrevocably fixed.  the character of the deceased, (which on the trial was proved to be unspotted and most excellent)--her age--the severe manner of her death--and the age and conduct of the prisoner--excited more than usual interest. The trial commenced on the 20th of June, and continued with little intermission until the 2d inst. when the jury retired from the bar at 4 o'clock A.M. and in fifteen minutes returned with a verdict of guilty.
The trial was most ably managed by Mr. Van Buren, Attorney General  and W.H. Elting, District Attorney, for the people and S. Sherwood, E. Root, J. Sudam and A. Parkers, Esqrs. for the prisoner. The counsel for the prisoner, Messrs. Sherwood and Root, in summing up the cause, used every argument that ingenuity could invent; and the Attorney General, in closing for the people, attracted more attention and admiration than was ever before witnessed at this bar.  He was uncommonly clear, concise, and at times extremely eloquent.  The trial throughout was conducted with the utmost liberality and feeling.
During the whole of the above mentioned trial, his honor, Judge Woodworth presided, with a uniform display of moderation, impartiality and dignity, highly worthy of the character of a judge of the supreme court of this state, and which enlisted the feelings and dispositions of the numerous audience, as far as the writer of this article could ascertain them, greatly in his favor.  The Prisoner never could have had a fairer trial, nor thed people more justice done them.
Nathan Foster Executed
The Gazette, Geneva, NY, August 18, 1819
Nathan Foster was executed on Friday last, in Delaware county, for murder, in pursuance of the sentence of his hon. Judge Woodworth.  It is matter of regret, that he gave no evidences of penitence or contrition, but stubbornly persisted in asserting his innocence to the last--Alb. Ade.
Nathan Foster Rests Under Traffic's Roar
Binghamton Press, November 13, 1949
By Grace Cook 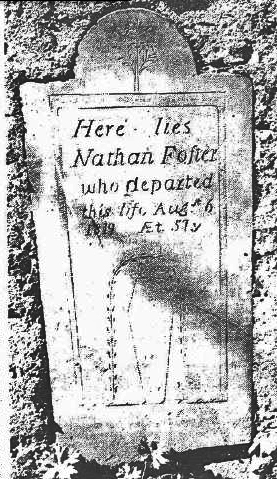 Old tombstones may be found in strange places throughout Delaware County but probably none is in a more incongruous position than that of Nathan Foster.  He was the second man to be hanged in the county and his headstone is now embedded in the foundation of a barn on the Arthur Turtur farm near Masonville [Delaware Co., NY].  Foster was accused of poisoning  his wife, was tried at Delhi and convicted.  All of this took place away back in 1819.  According to the story which has been handed down from one generation to another, Foster and his wife lived on the farm where his headstone now reposes.
Country women had a hard row in those days what with butter to churn and work, rag carpets to weave, candles to mold for light, men's and boys' suits to sew as well as their own, besides the regular baking and cleaning.  So a comely young woman was hired to assist Mrs. Foster.
But the 57-year-old farmer and the comely hired girl fell in love.  Then she left, perhaps at Mrs. Foster's command, and went to Jericho, or Bainbridge, as it had been renamed five years before.   Distance only made their hearts beat fonder and according to legend, Foster placed poison in some cake which his wife ate and killed her.
The trial created intense excitement.  The defense hired two brilliant lawyers, Erastus Root, a former state assemblyman, senator and one-time lieutenant governor, and Gen. Sam Sherwood of Delhi and New York City who represented this district in Congress and also commanded the Delaware county militia.  The district attorney was not to be outdone.  He called in Martin Van Buren, Esq., who was later to become the eighth president of the united States but was then attorney general.
The defense fought hard but the jury brought in a verdict of willful murder  Foster was hanged by Martin Keeler of Kortright, then sheriff of the county.  He made a will on the day he was hanged, but never made a confession of guilt....
Nathan Foster must have loved the countryside where he lived.  A little brook wanders pleasantly down through the rolling pasture land and he asked to be buried beneath the shade of his favorite elm tree which grew beside its banks.  Someone carried out his wishes and tended the grave with loving care.  Could it have been the comely young woman from Jericho or perhaps a broken hearted son or daughter who believed in his innocence?
A tablet of native stone was set, and a smaller marker at the foot with the initials "N.F."  A graphic story is told in the carving on the headstone.  At the top is the spreading elm and at the bottom one lone branch droops over Foster's coffin.  The inscription reads:  "Here lies Nathan Foster who departed this life Aug. 6, 1819, AEt. 57 y"  someone must have kept careful watch over the lonely grave, for a few years later it was discovered that water was seeping in and the body was taken up and buried on higher ground.  Than as time slipped by there was no one left to keep the grass cut or place bouquets of purple violets or black-eyed Susans there in season.  Perhaps cattle trampled it and the headstone fell over.
Strangers bought the farm. The fallen headstone meant nothing to them.  When a new barn was needed the ground where the old grave lay seemed ideal for its location so for years the stone was lost, hidden under the barn floor.  When the site for the county road, in recent times, was surveyed, the barn had to be moved. Then again the tombstone came to light.  Benjamin Dean lived on the farm at the time and he incorporated both the head and the footstone into the new foundation, setting them into the concrete the same distance to the rear of the front corner that they once stood ahead of it.
The old elm still stands by the babbling brook, a hoary old giant, seven feet in diameter.  Lightning has struck it so many times that its branches are broken and ragged, but like a fighter taking the punches it stands solidly against wind, rain and snow, its head bloody but unbowed. Only the stones were moved when the road went through so today the bones and dust of the unhappy man are said to lie beneath the pavement.  Instead of the quiet of the lonely pasture, all day there is the rumble and clatter of heavy trucks and automobiles passing all unknowingly over the body of the man who longed for peace in his long sleep.
Compiler Note:  Eleanor, wife of Nathan Foster, was buried in Pioneer Cemetery in Masonville, Delaware Co., NY

Posted by Local History Notes at 8:06 AM

Local History Notes
Genealogical and local historians are very interested in news items about locales and families of interest. Through this blog it is intended to share news items from various sources relative to the Southern tier of New York State (e.g. Broome, Chenango, Delaware Counties). The goal is that a researcher may find a missing piece that helps them further develop their family history.